Recently a friend and I were discussing what’s known in some circles as “substandard English.”

To be specific: Her and me were having a little conversation about “her and me.”

My friend confessed to thinking poorly of native speakers who habitually violate rules of grammar. One of the most grating errors for her was the use objective pronouns as the subjects of a sentence (For example, “Him and me are having an argument.”) My friend felt badly about her reaction, but said that she couldn’t control it, even with transgressors she thought well of otherwise. 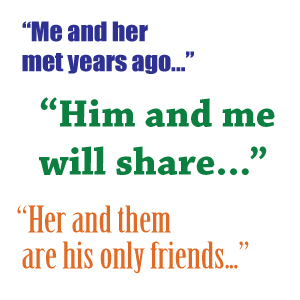 I commiserated. A sentence such as “Him and me went to the mall” has a fingernails-on-the-chalkboard quality to my ear. But while I agreed that this particular usage was lamentable, I predicted that it would become acceptable English within our lifetimes.

If a language is alive and well, changes are inevitable. (Latin’s not evolving much these days.) But that doesn’t mean that all changes come easily.

On the one hand, changes that are useful, such as words to describe technological developments, will be quickly absorbed. They don’t sound wrong, they just sound new.

But changes that aren’t useful, such as the use of “her and me” as paired sentence subjects, will meet resistance from everyone for whom they sound incorrect.

Curiously, speakers who would say “him and me ate breakfast” would never say “me ate breakfast” or “him ate breakfast.” Apparently using a single objective pronoun as a subject still sounds improper even to the language barbarians among us.

That’s why, on October 7, while scanning a brief item in the “On Campus” section of the Wisconsin State Journal, I was stunned to encounter the following passage:

Her and others in the Hmong community criticized the university…

and worse, because it seemed a further degradation:

Her is a Madison-based advocate…

I choked on my coffee. If this was acceptable to my local newspaper, then my prediction was fulfilled and my lifetime was going to be a lot shorter than I’d thought.

Then, on my way to the depths of despair, I noticed that the offending sentence referred to a man named Peng Her. Relief was immediate. Not yet, I thought. Not yet.

Still, it’s only a matter of time.

She received 84 entries, and decided that mine was one of six finalists. Here’s my effort:

Hazel and I had a “12-step-commedia dell’arte” kind of relationship. Our respective sex addictions repeatedly threatened to kill our marriage, but we always managed to dance away from the yawning cemetery plot of divorce.

Unfortunately, my latest infidelity involved her sister. To keep the scene from getting ugly, I suggested that we reconcile in public, over mutton at a local restaurant.

Hazel ordered for me, animelles, the sheep du jour. But when the codswallop arrived, and she handed me my noix dans un sac, I got the message: ironing out the wrinkles wouldn’t be so easy this time.

The coffee shop guy (baristo?) didn’t hesitate when I asked him which scone he recommended–the blueberry or the lemon. “Always go for the berries,” he said. His reasoning was that the basic batter was the same for both and included a touch of lemon. And so I had the lemon-infused blueberry scone.

It occurred to me that his advice had a wider application, and I promised to look. Later that day, inspired by the debut of yet another generation of Canada geese (Canadiansis excrementii), several interpretations of “always go for the berries” came to mind:

What does “always go for the berries” mean to you? If you favor an alternative philosophy, what is it?

[Second Thought: It is possible, of course, to overdo this advice and by always choosing berries, destroy their mystique. Going for the berries without exception risks becoming desensitized to their special delights. Overused becomes overlooked. That’s why in J-School they warn against resorting to the same fireworks every time to open story, an error known as “berrying the lede.”]

Grandson O was vocal from the start. What we used to call a chatterbox. Although his babble had the familiar rhythm and intonation of speech, the vocabulary was all his own.

O was in no hurry to speechify regular English. There was no need for language reciprocity for most of his first two years, as if his world were fine as is. Although we adults must’ve seemed a bit dimwitted to him, the accommodations and service we provided were good enough not to require correcting.

Then at about 20 months something changed. Almost overnight O became a tour guide through the land of language acquisition. Each day he produced new words, then began stringing them together in twos and threes. And in the process, he reminded us that communication resides in more than words and their juxtaposition. There’s also meaning in attitude.

The other day, O’s mother called him to dinner. Once. Twice.

Unfortunately O was busy and not to be interrupted. After the third directive, he apparently realized that somebody needed to cool it. So without pausing in his play, O replied, “I’m com-ming.”

Which–as his tone made clear–he had no intention of doing.

The reluctant acknowledgment. The insincere commitment. The casual dismissal.The unassailable conviction that his schedule took precedence over all others–the attitude behind his response was a revelation and a revolution.

From toddler to teenager in three seconds flat. Waiting for the calendar to catch up is going to be fun.

Seldom messed his firmly, beck in Bouncing, Idaho. So he cooled his debtor on hiss chip cell fan.

“All see you on Fried-dough,” he sat. “Whale have a niece dinar to gather.” But his doter coot barley hair ham.

Seldom toast some clues in a beg. After a lung plane trap, he trove a rundle cow to his farther’s horse. It wed be gut to see his ruler tiffs after so money yours.

“For Kirsten Tomlinson, so much of the 2012 prep softball season must have felt like deja vu. Poynette’s senior pitcher helped the Pumas repeat as Northern Capitol Conference champions.”

I’m not unhappy for Ms. Tomlinson, who I’m sure deserves the honor. I’m unhappy for the loss of a sublimely useful term and the concept behind it.

You see, Ms. Tomlinson’s second consecutive award did not create “the illusion of having previously experienced something actually being encountered for the first time.”

No, the young athlete’s worthy achievement was a repeat, a second memorable occurrence. In other words, it was not déjà vu at all.

“Déjà vu” is one of those rare French imports (from the early 1900s) that we in the U.S. have accepted enthusiastically. 1960s-era Yankee catcher Yogi Berra is widely given credit for declaring that teammates Mickey Mantle and Roger Maris’s repeated feat of hitting back-to-back home runs was a case of “déjà vu all over again”.

Since then, we’ve steadily been losing our original sense of déjà vu.

I’m not a usage nanny (although I do admit to some strong prejudices). In this case, however, I find it sad that, through verbal sloppiness, we seem to be throwing away a perfectly good term. One whose uniqueness is acknowledgment of an odd existential pleasure.

So if “déjà vu” is going to be a synonym for “been there, seen that,” what are we going to call that delightful shiver of false recognition that comes from, say, walking into a strange room and feeling that, by means of some impossible cosmic twist, we’re returning to a place we once knew well?