When two-year-old O finds a tricycle in his grandparents’ garage, he first puts on Grammy’s helmet before trying to ride.

Each time we play Driving the Car, O fastens his imaginary seatbelt. 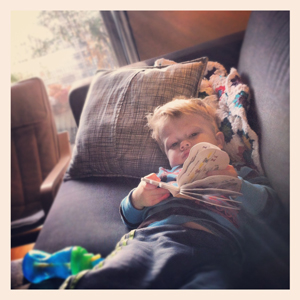 Between bouts of activity, O is likely to sit down with a book.

O is a modern child, growing up in a fully electronic household. His parents’ primary sources of news and information are Internet devices. O has long known how to unlock a phone or an iPad, and he loves, loves, loves pushing buttons. But just as O associates helmets with bicycles and seatbelts with cars, he connects books with relaxation.

O expects someone to read a book to him before his afternoon nap and again at bedtime. In between, he’ll ask for storytime whenever he’s in the mood. Sometimes he wants to be read to, sometimes he wants to explore pages on his own. In any case, books have become the linguistic equivalent of comfort food for him.

Because of the positive associations his parents set up, O doesn’t question the value of books any more than he questions the value of bicycle helmets or a seatbelts. All of them provide refuge from the uncertainties of a busy, stressful world. Because of the connections he’s making today, he’ll always travel safely, and he’ll always want to curl up with a book.