A history of relations between women and men in four acts, from prehistoric times to the near future. Inspired by the plays of You-Know-Who. (The 10-minute play Beg Pardon is adapted from Act II of All Be Damned.)
* UNPRODUCED: World premier opportunity available. Operators are standing by.
Top

It is 1867, late in the second term of the Lincoln administration. Having survived an assassination attempt, and weary from war and the demands of Reconstruction, Abraham Lincoln looks forward to retirement with his wife. He is forced to reconsider, however, when a demagogue threatens the nation’s fragile reunion. The constant and conflicting demands of constituents, allies, and enemies sorely tests Lincoln’s wisdom, compassion, and sense of civic duty. (The 10-minute play In His Place: 1867 is adapted from Armies of the Potomac.)
* RECOGNITION: One of eight finalists for the Mario Fratti-Fred Newman Political Playwriting Contest, New York, Ny. (2012)
* UNPRODUCED: Here’s your chance.
Top

Sally Hemings was the enslaved half sister of Thomas Jefferson’s wife, Martha. In more than three decades as the president’s “substitute wife” (after Martha died), Hemings gave birth to four children who survived to adulthood. Although few details are known about Hemings’ and Jefferson’s relationship, we can imagine what survival taught Hemings about leveraging whatever power she might have. (Beg Pardon is adapted from the full-length play All Be Damned.)
* PRODUCTION: Broom Street Theater, Madison, Wis. (2018)
Top

The time is 1867, late in President Abraham Lincoln’s second term, and two years after John Wilkes Booth’s failed assassination attempt. Reconstruction proceeds in fits and starts, partly due to unhealed hatred and the ill will of political scoundrels. Does the president have the wisdom and the wiles to survive hostile opposition? Do you have any doubts? (In His Place: 1867 is adapted from the full-length play Armies of the Potomac.)
* UNPRODUCED: What are you waiting for?
Top 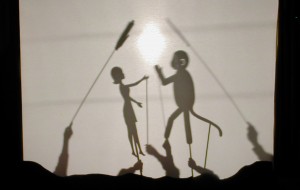 The Monkey Queen holds court in her tent.
Photo courtesy of Actor’s Factory.

Two sisters and their cousin share a tent on a family camping trip. With the help of the Monkey Queen, Barbie, and Two Hands, the girls speculate about the relationship between their single parents at the next campsite. The style of this do-it-yourself shadow play is suggestive of Southeast Asian shadow theater, with roles for as many as three girls, three puppeteers, and three voices.
* PRODUCTION: Actor’s Factory, Stoughton, Wis. (2005)
Top

Deities are at their most majestic when they fight dirty. For Zeus and Hera this means that an ordinary dressing room makes a serviceable field of battle in an eternal war.
* PRODUCTION: Mercury Players Theatre, Madison, Wis. (2004)
Top 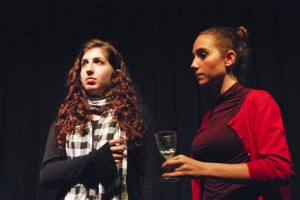