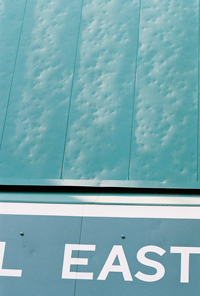 The marks of balls that didn’t make it out of Fenway Park. Not humid enough?

A hallmark of human endeavor is conventional wisdom. Sports seem to be particularly rife with self-appointed wise men and their decrees. And the overlap of the baseball and football seasons is particularly fertile ground for pundits to plow.

* By this point in 2012, you’ve surely heard that no NFL football team that started with a 2-4 (or 1-5 or 0-6) record has ever played in that year’s Super Bowl. This factually correct statement is always delivered predictively, as if such numbers were a curse, rather than the marks of mediocre teams unlikely to finish in contention.

* Every year that the New York Yankees earn a spot in the MLB playoffs, we hear that their mere presence should strike fear into the opposition because the Yankees have a (current) record 27 championship trophies on the shelf. This factually correct statement is also delivered predictively, as if the ghosts of Babe Ruth and Lou Gehrig had influence over the flight of the ball.

Superstition is part of sports’ charm to some degree. However, superstition makes us less likely to question factually incorrect pronouncements. For instance, how many times have you heard the conventional wisdom that humidity gives baseball pitchers an advantage “because the ball doesn’t travel as far,” ignoring the fact that water vapor is less dense than the other stuff that air is made of.

Unfortunately there’s little that can be done to remove conventional wisdom and superstition from sports. It does pay, though, to roll your eyes when you hear it and check the facts when pundits have their say.

What’s your favorite example of conventional wisdom or superstition in sports?