Sometimes books raise questions. Sometimes books supply answers. A reader who pages through the picture book Mr. Reaper can be forgiven for asking: “Huh? What was the publisher thinking?” and arriving at the conclusion that allowing a popular and successful artist free rein is not always a good idea. 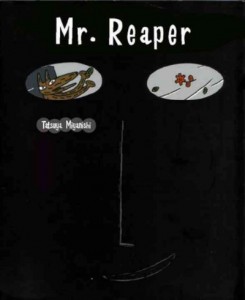 At its most basic, Mr. Reaper tells the story of a wolf who sets out to nurse a sick piglet back to health so that the wolf can eat him. The ending implies that the sacrifices that the wolf makes for his patient transform them into the best of friends.

Unfortunately the bizarre decision to have Death narrate what should’ve been a simple and benign tale of empathy destroys whatever value and appeal it might have had. Instead of sweet and straightforward, the story is grim and garbled. Nearly every page shows Mr. Reaper spying on our characters while he repeatedly threatens them with imminent and capricious doom:

“The Reaper silently gazed at the two…In fact, you two will soon die.”

It’s not that death is an unsuitable subject for preschoolers. The University of Wisconsin-Madison’s Cooperative Children’s Book Center lists several books about grief and loss for children as young as three. Books such as Robie H. Harris’ Goodbye Mousie reassure children that death, while profoundly different from sleep, is just as natural.

What’s wrong with Mr. Reaper is its overriding sense of foreboding and hopelessness. The black book jacket, die-cut to suggest two watching eyes, sets the harsh tone right from the bookshelf. Even though the final spread shows the former predator dancing with his erstwhile prey in a meadow, the flower heads that surround the dancers reinforce the reader’s feeling of being watched by an inescapable bully. It’s a confused and unearned “happy ending” that’s insufficient to undo the damaging message of the rest of the pages.

Mr. Reaper is the work of graphic designer and writer Tatsuya Miyanishi, who his many Japanese, French, Chinese, and Korean readers surely revere. Mr. Reaper, published in Miyanishi’s native Japan in 2010, was his first work to be released in English (in this  charmless, dull, and unattributed 2012 translation). Given his obvious skill as an artist, one hopes that the dismal Mr. Reaper doesn’t kill Miyanishi’s chances with a U.S. audience.

Seldom messed his firmly, beck in Bouncing, Idaho. So he cooled his debtor on hiss chip cell fan.

“All see you on Fried-dough,” he sat. “Whale have a niece dinar to gather.” But his doter coot barley hair ham.

Seldom toast some clues in a beg. After a lung plane trap, he trove a rundle cow to his farther’s horse. It wed be gut to see his ruler tiffs after so money yours.

A blue whale typically spends 10 to 12 months in the womb; an elephant about 22.

So are you surprised to hear that it took author/illustrator Chris Raschka 10 years to create the 32-page picture book A Ball for Daisy.

Many people assume that creating a children’s picture book is a relatively simple matter. For the writing, come on–500 to 1,000 words–how long could that take? An afternoon, a weekend, maybe. Certainly no more than a week.

Illustrators get a little more respect from benefit of the doubt, partly because the confession “I can’t draw” is as common as “I can’t do math.”

Still, 10 years for a storybook for little kids? And did I mention there are no words in this particular book. What could possibly have taken so long?

In this case, perfection.

The American Library Association awarded Raschka the 2012 Randolph Caldecott Medal for best illustrated story for A Ball for Daisy. Soon after the announcement, he told NPR that his first wordless picture book was a challenge. “It went through many, many variations.”

Any book of this type has technical demands. Here, it was the desire to tell a story solely through a dog’s face and body. But even more difficult was the need to convey emotions to an audience that has very limited experience with them.

A Ball for Daisy is about loss, which can be especially devastating to a preschooler who likely doesn’t understand its irreversibility. Raschka could have “explained” it all, but let’s face it, explanations don’t make loss any less  painful for those of us old enough to be familiar with it.

Instead, A Ball for Daisy, shows subtly and reassurringly that although the loss of something beloved can leave a hole that can’t be filled, it also can lead to a new appreciation and joy for what remains, whether it’s already known or is yet to be discovered.

Finding a way to give a three-year-old hope–in pictures alone–isn’t something that you can figure out overnight. In fact, I’m surprised it only took 10 years.