Most readers make the decision to proceed with a book within the first few pages, usually before the plot gets going. And what evidence do readers have to go on? Only the narrator’s voice, the trickiest element of storytelling.

Here’s my favorite example of a voice that demands attention:

People do not give it credence that a fourteen-year-old girl could leave home and go off in the wintertime to avenge her father’s blood but it did not seem so strange then, although I will say it did not happen every day. I was just fourteen years of age when a coward going by the name of Tom Chaney shot my father down in Fort Smith, Arkansas, and robbed him of his life and his horse and $150 in cash money plus two California gold pieces that he carried in his trouser band. 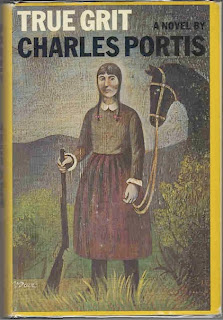 The plot details in this opening paragraph of True Grit are incidental. More important is the fact that in these first two sentences author Charles Portis deftly conveys his narrator’s basic character–her morals, intelligence, and determination–and we fall in love with her at once. With the sound of Mattie Ross’ voice, we instantly commit to her tale. Her voice makes us believe, respect, and root for her. There is no way to turn away from her story after we hear her speak.

I believe creating a narrative voice that is credible and compelling is the writer’s single greatest challenge. Plot isn’t worth a damn unless we give a damn about the storyteller. The voice we hear on page one better be someone who sounds interesting. After all, he or she is asking to live inside our heads for a while.*

What is your favorite narrative voice–the one that sold you on his or her story from the very first sentence?

* By the way, the same point applies to nonfiction. Even some textbooks are more readable than others because of the writer’s voice.