I’ve signed up for the 31 Plays in 31 Days project, committing myself to daily playwriting throughout the month of August. The project includes a five-day warmup of 256-(alpha-numeric)-character plays. Here’s today’s warmup play:

STUDENT: It’s hopeless. I should never have declared double majors.
FRIEND: So you have two final papers? Where are you with that?
S: Stuck. For weeks now, nothing. I swear it’s like a medical condition.
F: Oh, yeah, what?
S: Impacted theses.

I’ve signed up for the 31 Plays in 31 Days project, committing myself to daily playwriting throughout the month of August. The project includes a five-day warmup of 256-(alpha-numeric)-character plays. Here’s today’s warmup play:

WIFE: Look at this! Just LOOK.
COP: We’ll need an inventory.
W: Of stuff I might not remember. Great.
C: I don’t make the rules.
W: And why’d they have to make such a mess?
C: Choosy, I guess.
W: Oh, and THIS necklace wasn’t good enough for them!

I’ve signed up for the 31 Plays in 31 Days project, committing myself to daily playwriting throughout the month of August. The project includes a five-day warmup of daily 256-character plays (needless to say that’s 256 letters, spaces, etc.). Here’s my warmup play for July 25: 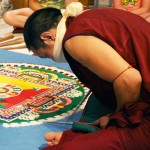 Monk at work. (The scarf is a sneeze guard.) Click to enlarge.

Recently I watched Buddhist monks labor over a sand mandala meant to celebrate the deity Green Tara, who embodies the feminine characteristic of compassion.

A mandala’s elaborate overall design is traditional, yet unique to the site and the situation in detail. Rendering one in sand involves carefully applying grains from the mouth of a narrow funnel called a jamphur. Rubbing the side of a full jamphur with an empty one generates a controlled vibration that dispenses the brightly colored sand, a few grains at a time. The sound of the jamphurs in action builds and fades like the buzz of cicadas.

Tools of the trade.

The sand mandala that I saw under construction was the product of scores of monk-hours over the course of a week. The intricate display was destined to be erased when finished, its mingled sands ceremoniously strewn onto the nearby Wisconsin River in recognition of the impermanence of life. 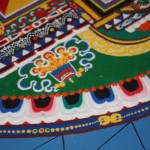 Note the texture of the white border, like icing piped onto a cake. Notice too how uniform the layer of green sand appears.

As an artist, I was not surprised that it pained me to consider the fate of this beautiful work of art. I’d be tempted to try to preserve it.

Compassion is fine, of course, but being nonreligious, I think the act of destroying what had been so painstakingly assembled says much more about the humility of sacrificed ownership.

For many of us, this is an unobtainable ideal.

She received 84 entries, and decided that mine was one of six finalists. Here’s my effort:

Hazel and I had a “12-step-commedia dell’arte” kind of relationship. Our respective sex addictions repeatedly threatened to kill our marriage, but we always managed to dance away from the yawning cemetery plot of divorce.

Unfortunately, my latest infidelity involved her sister. To keep the scene from getting ugly, I suggested that we reconcile in public, over mutton at a local restaurant.

Hazel ordered for me, animelles, the sheep du jour. But when the codswallop arrived, and she handed me my noix dans un sac, I got the message: ironing out the wrinkles wouldn’t be so easy this time.

Procrastination Tip #16
All this criticism of federal government surveillance will disappear once we realize that we now have a way to precisely retrace our steps so that we can find our missing car keys.

Procrastination Tip #18
Speaking of things Russian, I successfully threw away an old garbage can using the “matryoshka doll method,” which requires a larger garbage can that I wanted to keep.

Procrastination Tip #19
I think one of my toes is growing, but I can’t be sure without going through all our old family photo albums in search of a baseline.

Procrastination Tip #20
What the world needs is a poem that rhymes “waif,” “naif,” and “giraiffe.” 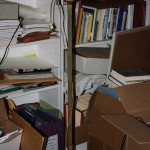 A portion of my future estate. (Click to enlarge if you dare.)

After my parents died, my siblings and I were faced with the task of sorting through the detritus of their lives. After their eighty-plus years–more than fifty spent in the same house–this amounted to a stash that could be measured only in units commonly known as “dumpsters.” Typical of our discoveries were:

These findings filled me with dread, as they reminded me of the contents of my own basement. Was I wading through my own legacy foreshadowed? Is hoarding genetic? 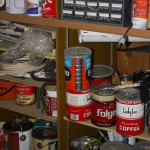 The well-stocked maintenance shelves of a prudent homeowner.

Immediately I began assembling excuses. One basic goal as a homeowner is to conduct routine maintenance without having to go to the hardware store for tools and materials. You can’t do that without a healthy inventory of stuff that might eventually come in handy for repairs.

And of course, even things that I no longer need could be of value to others. Those cane-backed chairs, for example. How can I in good conscience send them to the landfill when with a few hours’ worth of skilled attention, they could be returned to full use in someone else’s dining room?

In the same way, I’m temporarily holding some things until their potential reveals itself. 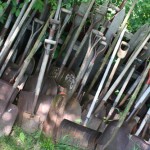 The eclectic shovel holdings of Hippie Tom. No relation.

And let’s not forget, a good third of the contents of my basement belongs to my grown children, who use the space shamelessly as a free storage facility.

Sure, I’ve amassed a wee bit of useless junk. But I have no candles, rubber stamp blanks, or margarine containers. And I’m no Hippie Tom–now there’s a hoarder’s hoarder.

I’m just a guy who’s his parents’ son, and how can you blame me for honoring their memory as I see fit?

The coffee shop guy (baristo?) didn’t hesitate when I asked him which scone he recommended–the blueberry or the lemon. “Always go for the berries,” he said. His reasoning was that the basic batter was the same for both and included a touch of lemon. And so I had the lemon-infused blueberry scone.

It occurred to me that his advice had a wider application, and I promised to look. Later that day, inspired by the debut of yet another generation of Canada geese (Canadiansis excrementii), several interpretations of “always go for the berries” came to mind:

What does “always go for the berries” mean to you? If you favor an alternative philosophy, what is it?

[Second Thought: It is possible, of course, to overdo this advice and by always choosing berries, destroy their mystique. Going for the berries without exception risks becoming desensitized to their special delights. Overused becomes overlooked. That’s why in J-School they warn against resorting to the same fireworks every time to open story, an error known as “berrying the lede.”] 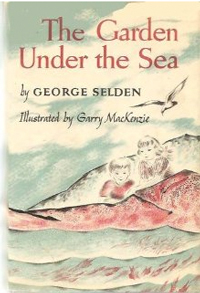 Surrogate carpet A and
surrogate “cigarette pack” B.

Once upon a time my then-seven-or-eight-year-old daughter had a favorite joke she liked to tell at family gatherings.

Here’s how the story came to mind on laundry day, 25 years later… 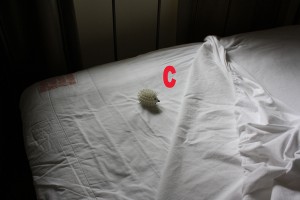 Imagine the now-flattened carpet as the homeowner delivers the following punchline: “By the way, have either of you seen my pet hamster?”